The City of Calistoga owns and operates a water reservoir and a conventional surface water treatment facility four miles northwest of the city. This water resource produces approximately one half of the total annual water demand for the community

The City’s water reservoir was originally named Ghisolfo Reservoir. It has since been known and referred to commonly as Kimball Reservoir. This reservoir has a surface drainage area of 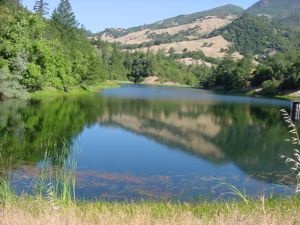 approximately 3.4 square miles. The City owns a portion of the surrounding watershed with the remainder owned by the State Parks Department and a private landowner.

Kimball Canyon Dam was constructed in 1939 by the City and was subsequently raised in 1948 to increase the storage capacity of the reservoir. The dam is an earthfill structure approximately 300 feet long, 200 feet wide at the base, and about 75 feet high. The spillway crest elevation is 575 feet above mean sea level.

The original storage capacity of the reservoir measured in a 1954 survey; at the spillway crest was approximately 345 acre-feet and 409 acre feet at the top of the flashboards (elevation 579 feet). The accumulation of sediment in the reservoir has since reduced the storage capacity to 312 acre-feet at the flashboard elevation according to a 1991 reservoir sounding study. Much of the sediment accumulation has been attributed to wet weather runoff that followed a 1985 fire which burned a large portion of the surrounding watershed.