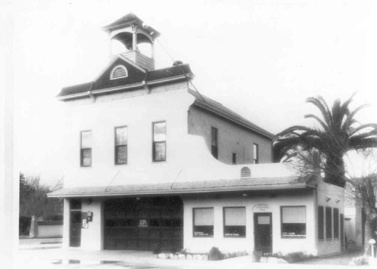 Calistoga's present City Hall was built on the site of the Bedlam Opera House, which had been named after a niece of Sam Brannan, the founder of the City of Calistoga. The Bedlam Opera House burned down and in 1901 the Calistoga City Council voted to build the present building.  The building was mainly constructed in 1902 and officially completed in 1903. The new City Hall housed the Calistoga Fire Department, Police Department, Library, City Court and the town band.

In August 1933, the City studied the possibility of obtaining funds from the National Public Works Bill to construct a new City Hall on the same site.  A committee drew plans and also found that funds were available from the Civil Works Administration for remodeling the building.

The City hired W. Herbert, a Santa Rosa Architect to draw up the plans for a new building. His plan called for a City Hall, Fire Station and Jail. Built with reinforced concrete and having room for the fire truck, jail and a vault. The projected costs, including vault door, all jail equipment, plumbing, electric lighting, hardware, window shades, benches and counters was projected at $11,100. This price also included a cottage for the Fire Chief to be built at the rear of the lot.

Due to the high costs, the City looked at remodeling the building. In February 1934, the Calistoga Chamber of Commerce protested the plans to remodel the City Hall, saying it should be torn down and replaced.

During these years, the Fire Department was located in the west side of the building, the Police Department in a  90 square foot area at the rear of the building and the City Clerk's office on the east side. The second story contained the living quarters for the Fire Engineer and a general meeting room. In January 1940, a new kitchenette was constructed in the living quarters on the second story.

On February 2, 1945, the Calistoga Chamber of Commerce again appeared before the City Council to request the City take immediate action to purchase the Electric Depot (site of the present Fire Department). The Chamber recommended this site for the new City Hall.  The City was able to negotiate a 10-year lease on the property from the owner, Jerome C. Siemsen, with an option to purchase it for $6,500.  The Fire Department moved into the Electric Depot and the City started to remodel City Hall in the area previously occupied by the Fire Department. One half of the area was then occupied by the Police Department and the other half by the County of Napa, as space for the Sheriff's Officers, Welfare Department and the Veteran's Service Officer.  The City continued to look for space for a City Hall, and in 1947 studied the vacant property at 1300 Fairway.

In February 1954. the American Legion was asked to move out of the second story of City Hall and the area was rented to the County of Napa, to be used as the Justice Court.

In February 1963, the City Council acknowledged the report of the Napa County Grand Jury, which noted deficiencies in the City-owned buildings. Two months later, Police Chief Ken Hively reported to the City Council the present jail was declared obsolete and did not meet the minimum standards for a jail.

In February 1965, the City had an immediate need for more office space. Plans were drawn up for a single story addition on the east side of the present City Hall.

Mr. Gerhardt, representing E. Nichols and Associates, stressed advanced planning to insure adequate parking, future requirements and development.  Mr. Gerhardt was instructed to prepare a schematic plan for the sum of $500. The next month, he presented a plot plan in which he pointed out it had availability to access the City Park, and there was room for expansion of building facilities and other features that made it a desirable site. The location he had chosen was occupied by the Calistoga Lumber Company, directly across the street from City Hall (present site of the Police Department). In June, it was determined this property was too expensive for the City to purchase. It was decided a new Fire Department would be constructed immediately behind the Electric Depot on Washington Street.  The Council discussed building a new Police Department to the rear of the new Fire Department building, but it was decided this would reduce the size of the parking lot and the idea was abandoned.

In March 1969, Police Officer Ed Taylor discovered a fire in the Napa County Sheriff's office space on the west side of City Hall. He quickly put it out, but it severely damaged the office. The Sheriff's Department immediately moved out and the Justice Court moved into the Howard Building (now the Magnolia Building) on Lincoln Avenue.  The Police Department expanded into the office space which was abandoned by the Sheriff's office, remodeling it themselves.

In the early 1970's, there was a large fire which destroyed the office of the Calistoga Lumber Company.  The City tried to purchase the property as a site for a new City Hall. The price was approximately $8,000, which was too expensive for the City. Again in 1972, the City attempted to negotiate the purchase of the property from the owner, Judge Shiftlett. His asking price was $90,000. Again the City turned it down. The City did rent a portion of the property and moved the Public Works equipment into the vacant barns from their location at the rear of City Hall.

In 1973, the City constructed a new Public Works building in the 500 block of Washington Street. They moved from City Hall. Their shop area, located behind City Hall was torn down two years later. One area of the Public Works Department not torn down was a garage located inside City Hall at the north-west corner of the building. It had double doors, which opened onto Washington Street to provide parking for a vehicle. In 1976, using donated material, the Police Officers converted this garage into an office. They also constructed a small restroom in the north-east corner of the building, which was the first indoor plumbing they had.

In the 1980's, the Police Department pushed the City to improve their facilities. The old jail was declared unsafe in 1983, which meant all prisoners had to be transported to Napa. The Officers constructed a 4 foot by 4 foot plywood box inside the Police Department to use as a temporary holding facility until a transport could be arranged. There were 15 personnel working in a 700 square foot area. The heat was turned off to their area as it was extremely old and unsafe.

In the late 1980's, the City purchased the lumber yard and started developing it for a new Police Department/City Hall.  The City Hall option was found to be too expensive. The present Police Department was finished in April of 1992.